An executive order by definition is, “a rule or order issued by the president to an executive branch of the government and having the force of law.”  Laws are voted upon, executive orders are not.  Many state governors have issued executive orders which is unheard of, as this right is reserved for the president. The order was originally supposed to last 30 days, and has now been extended again. At what point does the executive order erode our freedom, our democracy and right to vote for what risks we are willing to accept?

As the statistics for how many people have already recovered from COVID-19 climb, the question is how accurate are these numbers? It seems that everyone knows someone that might have had the virus in the beginning of the year. Back in February, I had an "upper respiratory infection" that lasted a month.  For three days I used my son's asthma machine due to tightness of my lungs.  Seven days later, my wife showed signs, went to the doctor twice over a month and was told she had  “pneumonia”.  One of GuideSpring's employees coughed for a month and her father tested positive for the antibodies.  This gave me interest in taking the antibody test and the results showed that I have antibodies to the virus. This all occurred way before we were told COVID-19 had reached the United States.  I am not an "official" Corona Virus statistic, yet I am.  Many of us are.

After tracking the ongoing case data, the result shows that the total number of new daily cases has begun to flatten, like we had hoped for and mentioned in our previous article “Flattening the Curve,” as well as seeing a significant decline in the multiplier. 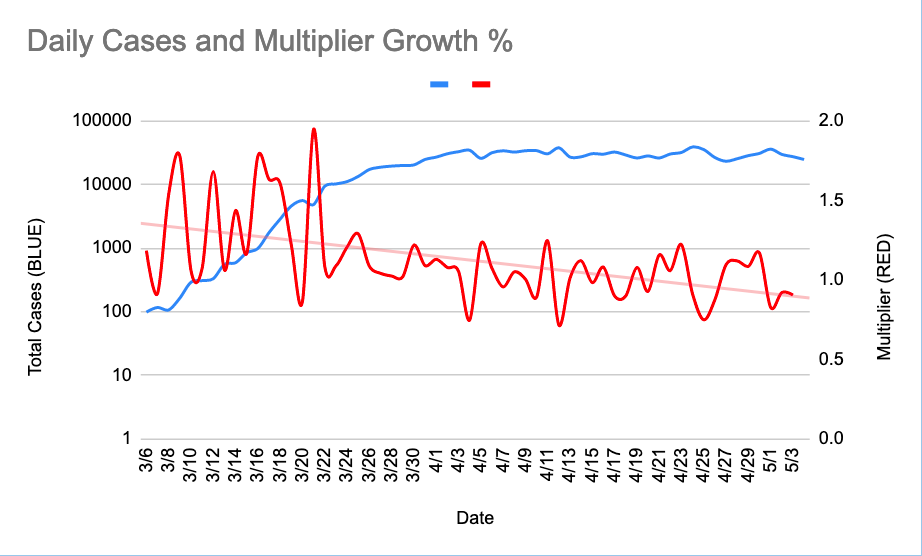 CDC wants us to believe the mortality rate is 6%.  But the math is skewed because it's only counting cases confirmed by the nasal swab.  But it doesn't include those that didn't take a test, a test wasn't available, or those that tested positive for antibodies. “Researchers from Columbia University recently estimated that only 1 in 12 cases of COVID-19 in the U.S. are documented, which they said would translate to an infection fatality rate of about 0.6%."(1). This would show that the mortality rate is actually 10x lower than the CDC is predicting.

Experts are now worried that America is on the verge of a mental health crisis and “warn that a historic wave of mental health problems is approaching: depression, substance abuse, post-traumatic stress disorder and suicide.” (3)  Federal emergency hotline use for people in emotional or physical abuse distress has risen over 1000% since this time last year. Businesses are facing financial risks and unemployment is at an all time high. At what point are these very real problems going to trump the unknown fear  of the virus?

It seems as if it is almost executive order vs American democracy. Life is built around risk, telling Americans what they can and cannot put themselves at risk for takes away our basic rights of democracy, and we never got to vote on this.  Stripping the voice away from the US population just to create a false sense of security is not what this country was built upon.

Be smart, be kind and I'm here for anyone that wants to chat.